On Thursday, local teenagers— Nya Collins, Zee Thomas, Jade Fuller and Emma Rose Smith—organized and led a massive march through the streets of Nashville to protest police brutality, making their way through Bicentennial Park to Broadway to the state Capitol. The protest started at 4 p.m., and according to some estimates, the march drew at least 10,000 people.

The event was organized by Teens for Equality, which began the protest with a series of emotional speeches from its members.

Teen organizer Zee Thomas gives a speech at the start of Thursday’s youth-led protest against police brutality. “As teens, we are tired of waking up and seeing another innocent person being slain in broad daylight,” said Zee Thomas, one of the six teenage girls who organized the mass protest. “As teens, we are desensitized to death because we see videos of black people being killed in broad daylight circulating on social media platforms. As teens, we feel like we cannot make a difference in this world, but we must.”

The protesters gathered behind a large banner reading “black lives matter” and headed toward downtown, stopping to chant, kneel and rally throughout the march. The thousands of demonstrators filled a roughly one-mile stretch of Rosa Parks Boulevard as they left Bicentennial Park and made their way downtown. When the protesters arrived at Broadway, they were stopped by police just before they reached the row of neon-signed honky-tonks. The marchers dropped to their knees as some protesters read out the names of those killed by police, including George Floyd and Breonna Taylor. 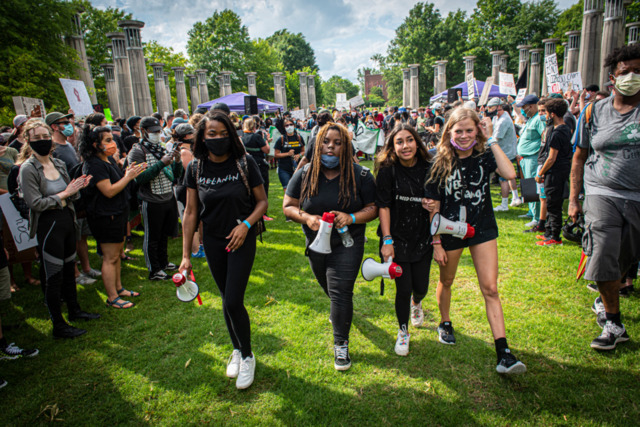